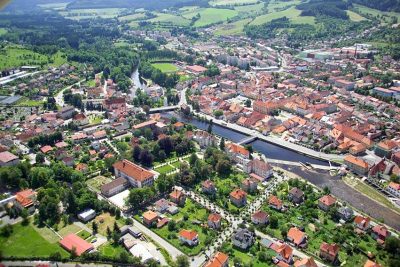 We are pleased to welcome you to the royal town of Sušice, the gateway to the Šumava Mountains. The town lies 465m above sea level in the highlands of Svatobor and is situated in a valley bordered by the undulating terrain of the Kalovy Hills. The former royal town has a population of approximately 11,500 inhabitants spreading across both banks of the Otava River and extends over an area of 45.6ha. The area of municipal woods is 1,172 ha and is the largest municipal property in the Czech Republic. The woods are crossed by many footpaths.

How to come to our town?

Some of the Czech towns: